Visiting The MacArthur Memorial with A Frugal Chick (Did I Mention It's FREE?) Be sure to read my other posts for Hampton Roads Travel!

In a beautiful part of Downtown Norfolk, VA near a mall I frequent is the MacArthur Memorial.  I tend to think of it as a “new attraction” in the area and I learned today I am DEAD wrong.  The actual building was built in 1850 as the City Hall (it had a few other functions as well) and was turned over to General MacArthur in the early 1960’s by Mayor Fred Duckworth with the idea of creating a museum and repository in Norfolk for the General’s library, papers and other memorabilia.  The General agreed on the condition that he and his wife, Jean, could be buried there. 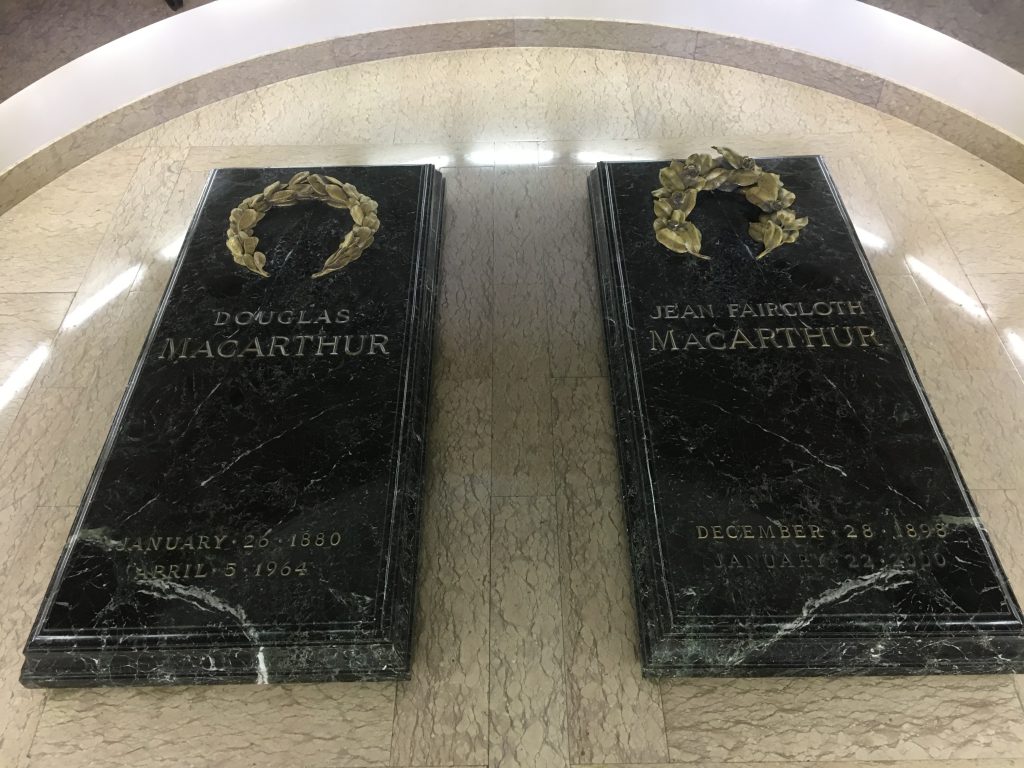 General MacArthur and his wife Jean and buried in the Rotunda at the Memorial.

So the building has been functioning as a museum since 1964.  So much for my “new” museum in Norfolk.  Regardless it took me until 2018 to get INTO the museum. General MacArthur renamed The Purple Heart and brought it back into use.

There are actually three buildings included- The Visitors Center, The Memorial and the Jean MacArthur Research Center.  You should begin in the Visitors Center (I didn’t know this so I went in the wrong building first).   There is a 25 minute film on the life of MacArthur and brief description of what is available at the Memorial.  It begins at the top of every hour and at the 30 minute mark.

Want to check out another hot spot for history?  See my visit to Montpelier- The Home of James and Dolley Madison! The first room is full of items from World War I.  It’s a really nice breakdown of how we ended up in the war and how it progressed both overseas and at home. Once you finish up at the Visitor’s Center you head next door to The Memorial.  When you first walk in it’s a beautiful rotunda where the grave markers are located. Before you keep going I would recommend the “podcast tour“.  It’s a link on their website that opens up a FREE 45 minute audio tour.   I used it to guide me through by listening on my smart phone with headphones in.  It points out the big things you don’t want to miss.  This also helped because I am a person who tends to read EVERYTHING on every plaque in a museum.  I would probably still be there if I had done that. 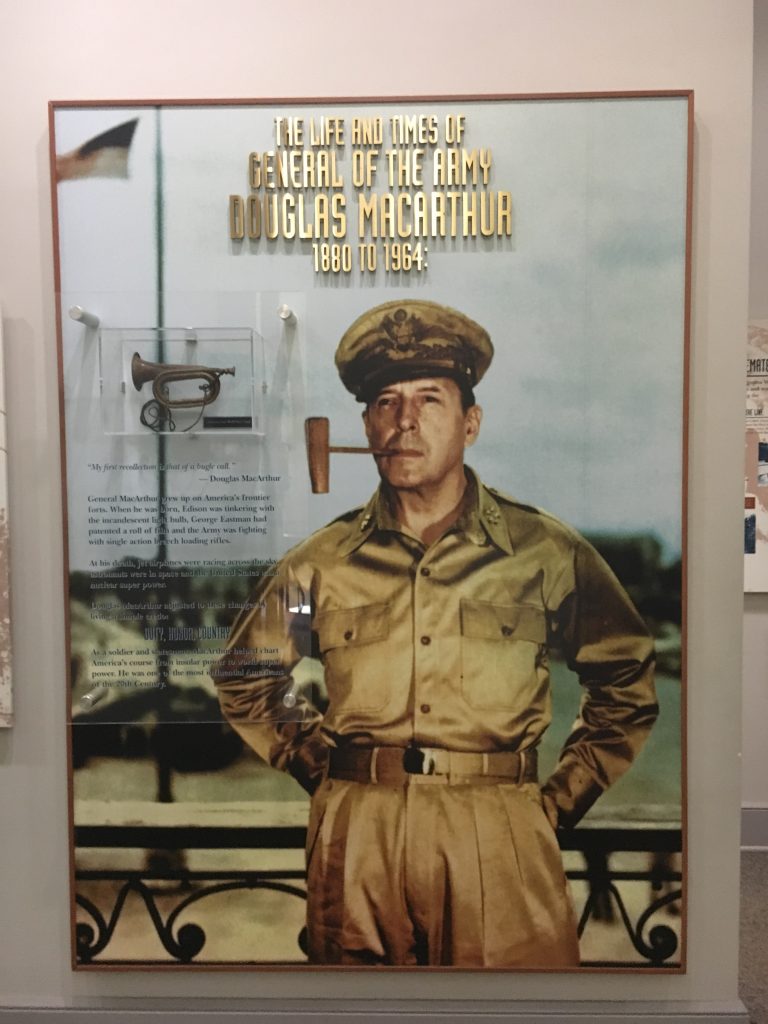 The nice sign at the beginning of the tour. Several galleries are set up with beautiful display cases full of treasures. 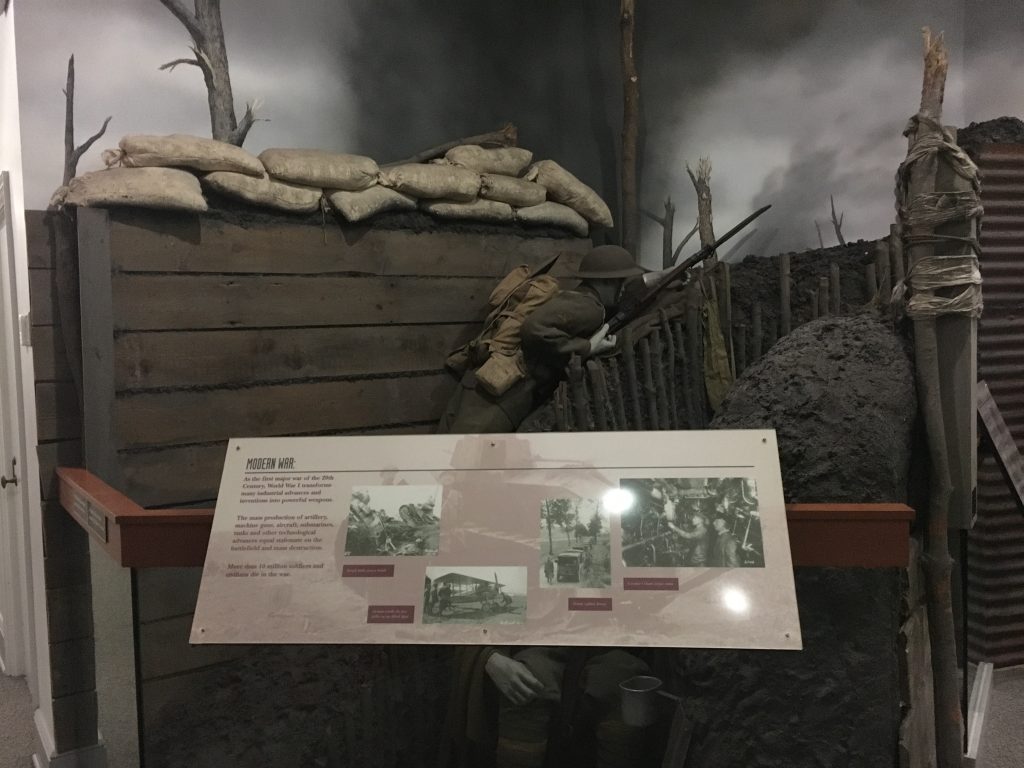 A few small places are set up with these types of displays. The museum is mostly filled with these boards.  I loved how it explained every detail. 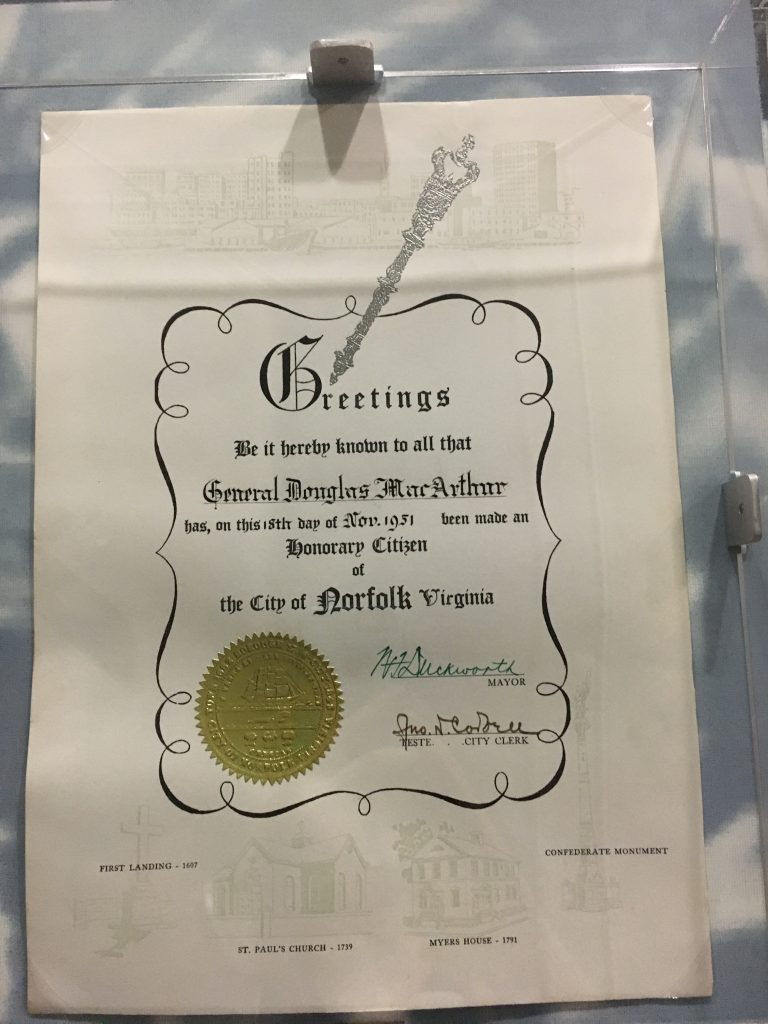 Although MacArthur was not from Norfolk it was his mother’s home town.  He adopted it and that is why he chose to have his memorial in Norfolk. His desk and some other personal items!   Including…. his famous hat, pipe and glasses. And it’s at the beautiful MacArthur Square with some beautiful sculptures and seating areas.  It’s a lovely place for a picnic or to sit and read a book.

From the time I arrived until I left was under 2 hours.  I parked across the street at the mall and they would have validated my parking had I remembered my pass.  So my entire visit was completely free!  It was a lovely afternoon to get out of the heat!